Kim Hyun Joong's special live was held at the Beach Stage at 5:00 on Thursday afternoon, March 28 Film Festival also celebrated the end. The venue also appear as the great success of the all-night set from the previous day! Mainly female audience of all ages were visiting from student to Oyakozure.
Wear and fan handmade and written in Korean [Saranheyo] (meaning love), or who is holding a tour goods, and towels Parker Green is the theme color of Kim Hyun Joong Many fans have been seen.
Live kicked off during romantic time that evening slightly overcast, raises the expectations of the audience begins undercard Orion League of comedians who are active in Okinawa, Kuromaniyon first love, of Uindo~u Urasoe, such as the practice of applause was. 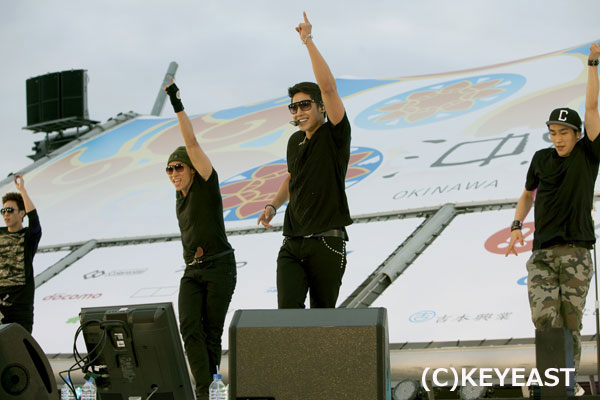 And impatient, the appearance of Kim Hyun Joong! The audience stood up in unison, intro of the first track [HEAT] When the flow out, screams of joy could be heard from the audience. There also directed the flame up to the tune, yellow cheer from the audience were up to that time.
Kim Hyun Joong has finished singing the first track in the dress of that slim black pants jacket Maokara deformation is greeted with "Hello" in Japanese, and Korean, "then please come and have a lot of people really I came to Okinawa two days ago, too. seed, you can eat delicious food or scuba diving, and talk Okinawa "and is an island you want to come again, cheers me up from the fans came from the prefecture was.
[Smile] The third track from the dance team, "ARTMATIC" appeared on the stage in Korea.Choreography when Kim Hyun Joong or female dancers take hands, such as turning a hand on her hip nearly a voice close to scream went up from the audience. 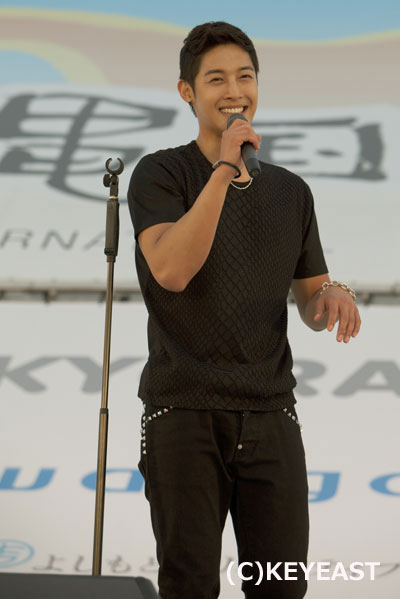 Track 4 Kim scaffolding 9th track is number danceable - Let Me Go], and [Do You Like That] is followed by the first [U], from track five little slow, he assembled arms dancers as Gymnastic • There also directed Mr. Hyun ride, cheers from the audience was constantly up to the gap that Kakkoyo dance fancy sweet mask.
From the audience in the front row of the joy in words until the last minute to stop by the fence to get off track from Stage 10] At I'm Yours, standing between the audience and the stage, called "I'm glad to sing at the same height as you" Voices were raised.
In addition, the pressure because he heard that there are many people in the situation for the first time that a concert in the festival, this time at the concert, but the hall is just my fans always ", this time seeing me for the first time said, "I think," while in the mouth and, "I feel like me remember well my name to people for the first time, to sing to the best song song, every time I finish one song Some people saw me for the first time today and "figure with or talking to venue" audience for the first time towards the back? Does enjoyable "and care for the audience, I have to see or TV if such as the appearance that joke name of came out, such as "Please buy Recall that" I think that the child was singing in the sea at that time ", new song came out, the size of the vessel seems professionally suggests. 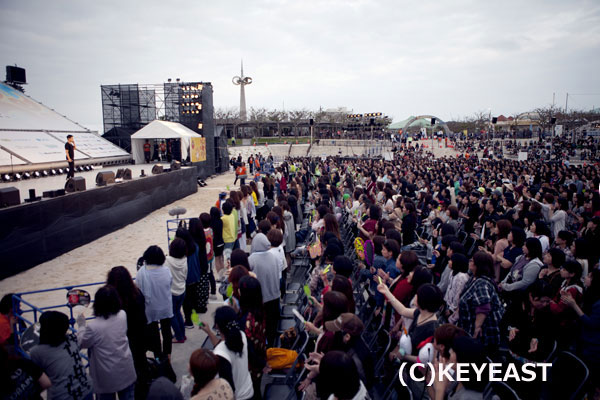 And 12 songs, live was proceeding well finish tempo, enriched the contents to a period of one hour. Voice of "Encore!" From the audience will not stop ringing for a while even after the end of the last song, the audience's satisfaction visited was suggesting.
"I also went to Korea concert in Japan, Okinawa stage was good near" was wearing a concert T-shirts and towels green, Oyakozure is that came from outside the prefecture I was talking excitedly with.
This special live has become a nice moment as Kakkoyo kindness and Kim Hyun Joong is transmitted to those who saw the first time in a long time fan.