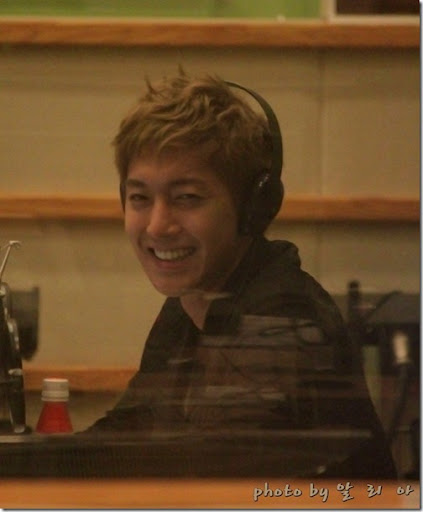 video
Part 1
Part 2
Part 3
translated by cheerko @soompi.com/khjthread
This will be very sketchy trans. The reason is that both KHJ and ChoiGH are mostly reading scripts sent in by the listeners. That is how CGH conducts her Thursday radio sessions. CGH also calls KHJ a very loyal guest because he promised to return and he has. KHJ says at the end of the prog that he has promised to return to Volume 3 times--he may return during the week of August 5~11 when he will be back in Korea after he goes overseas to meet his fans. He is going to Japan first. he might return in October when his new album comes out. These listeners wrote their own scripts based on events in their own lives. I am not going to translate them even though they are very interesting. CGH asks KHJ questions based on the scripts. I will translate those. Also, KHJ gives out three signed CD's from his first 100 album collection that he bought when they first came out. He is doing this because CGH is from the same agency.
---------------------
Part 1:
@2:17 KHJ was asked about his tired look. He has too much schedule these days and he says he sleeps about 4 to 4.5 hours per day. In about three days, his KIss KIss activity will end and he will be going overseas. KHJ says that whereever his fans are he wants to visit. He hears that he has fans in Nigeria and he is very curious about that as well. On fan wrote in that she got the 9000th CD album that was published with numbers. KHJ thanks her. KHJ found out 5 minutes before he came to the radio show that he is to read the script with CGH. (He does a real good job with it.)
Part2
@2;12 Choi asks what type of movie KHJ likes. He says he only likes Korean-made movies of all types. He would only watch foreign movies that had been seen by 500,000?? He can better understand the movie if made in Korea. Also, he somehow cannot concentrate that much when he sees foreign movies which usually have great scale. So, he did see most of what Choi made.
Many fans write in saying they love KHJ voice. KHJ thinks he remembers one name of the fans who wrote into the radio prog. Choi says that he tends to think out loud. The previous script is about short-lived love bet a passenger and a bus driver. KHJ says that he rarely rides bus. CHoi asks KHJ about any fateful meetings. KHJ says yes. His friend was going to introduce him to a woman. He was not that serious about it and said OK, OK. He says that he realized that he had accidentally met that woman before. He met her when he and several "hyungs" went to have some soju and saw her there. They talked there without knowing that KHJ's friend would introduce him to her later. Choi asks him if he did date her. He says yes. (That was the end of that story) CHOi says his story sounds a bit less than "fate". KHJ laughs and maybe so. But he says (somewhat strange), if it is fate, it is. (Boy, I thought he hates introductions but he was introduced by a friend and dated someone--but  it seems like he knew her before he was introduced and they both can have soju....I also wonder what he means by saying, if it is fate, it is. Perhaps there is something to this woman whom he met by chance at a soju place and he knows her already and then his friend introduced her to him. I think he is calling that meeting a fate. Very interesting,,,,keke)
KHJ keeps on saying that he recognizes fans' names---he thinks one of the fans is from Busan., etc. It makes Choi laugh. KHJ says that he recognizes many names who are writing into the show. He finally recognizes Kim Yooji fan who sent in some onion ?preserves? for KHJ. He says the received them well. He says that fan is studying to be pharmacist and will be goind abroad.
He gives Kim Yooji one of his CD. Choi calls that recognition "a fateful meeting".  Kiss Kiss is played.

Then they read a second script about a cold good-looking city boyfriend who later does marry the script writer and is now a very faithful husband of 12 years. He treats his wife like a queen, cooks for her and is very devoted.
Part 3
Fans write in that KHJ read that script as cold city man very well and they want him to play that type of role next time. KHJ wants that as well. A fan asks if KHJ is a type likes a woman who listen to him well or rather he prefers woman who would hold tightly to him/held down.  KHJ says that he is not easily held down or caught. He says that his style of woman does not listen well to boyfriend but who is "cool". He says someone who knows when to play and ,,,,He says that he cannot be/stick by the woman all the time. He wants a relationship where she can go out and play and he can go out and play with his friends as well. He does not like ?prssure=uk-ghap?. CHoi asks if he likes woman who may look very quiet but also knows how to play? KHJ says that, in terms of outer appearance, he does not care that much for quiet type of person. When he meets people who are quiet, he himself is not quiet that he cannot seem to have conversation with them. Fans are wirting in a lot saying that KHJ really seems like the character that was just read--somone who is cold, not explain things well, who makes the other person feel kind of bad,,,yet, he is gentle and kind inside. KHJ says that he does also find the character somewhat like him. When he is asked where he is going. He would say to a radio program. She would ask what radio. Then he would say, why, are you going to listen? Why do you aks? That is how he may talk. He says that he would rather the woman just take what he says as is and be understanding. CHoi says that KHJ seems like somewhat difficult person to deal with. (This is a slight different aspect about KHJ--isn't it?? He can be kind of cold...hehe)
He chooses 2 more people to give out CD copies.
Time to end.
Posted by mslee1107 at 11:29 AM