Hyun Bin's Life as a Marine Recorded in Book

scouting for more news about our SG hunk...wink:))
another update for you guys who loves and misses our dear Hyun Bin. 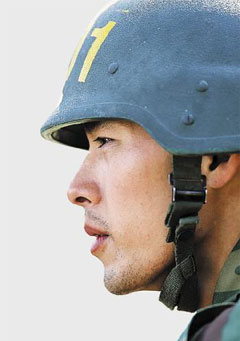 Hyun Bin A book called "I Am a Marine" about the barracks life of heartthrob Hyun Bin, whose real name is Kim Tae-pyeong, will be released by Planet Media on Aug. 8. The book features his experience as a marine from the time when he enlisted until almost the present day.

As part of the project organized by the Marine Corps, a professional ghostwriter interviewed the man dubbed "Korea's Elvis" by The Economist and took a firsthand look at his life at boot camp and in a marine unit on Baeknyeong Island.

In the three-part book, the first part deals with his daily training routines, while part two introduces Hyun's life as a marine, based on interviews with him and other members of his unit after they are deployed on the island. Part three takes a critical look at what it is like to serve as a soldier in Korea, with the at-times pressure-cooker culture highlighted by a recent shooting spree at another marine unit.

The book features about 300 photographs showing the marines in training and at rest in the barracks. About 50 feature Hyun in various poses, many of them heroic, such as him straining to carry a rubber boat over his head with his comrades, and him rappelling from a helicopter.

When asked which of his two names, Hyun Bin or Kim Tae-pyeong, sounded more natural, the movie star and rock and roll crooner replied, "I've gotten most used to being called No. 2101," referring to his recruit serial number.

But after the six-week boot camp training ended, he was more upbeat.

"I've really learned many things, such as how to stay patient, how to increase my physical strength, how to find ways to relax and build a better sense of camaraderie," he said. "But the biggest boon was that I got my real name back."